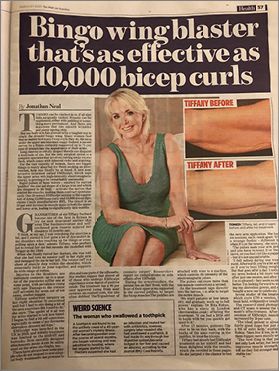 Tummies can be cinched in or, if all else fails, surgically tucked. Breasts can be augmented, either with padding or something more permanent. And there are injections that can smooth wrinkles and plump ageing skin.

But one body area has proved to be a tougher nut to crack: the dreaded bingo wing. Many women find that no matter how many bicep curls they do, the area under the upper arm becomes saggy.

Indeed, a recent survey by a fitness company suggested up to 71 per cent of women hate the appearance of their arms.

Long sleeves or artfully draped shawls can disguise a multitude of sins. But the only surgical option is a complex operation that involves cutting away excess flesh, which comes with inherent risks and scarring.

For the vast majority of women, there are bigger things to worry about but for those seeking an intervention, help may finally be at hand.

A new non-invasive treatment called EMSculpt, which zaps the upper arms with high-intensity electromagnetic energy, is proving to be remarkably successful.

Rapid pulses of these waves – emitted by curved ‘paddles’ the size and shape of a large iron and which are strapped to the body – activate the nerves that control the muscles, making them contract spontaneously.

One 30-minute EMSculpt session is the equivalent of doing 10,000 bicep curls and 10,000 tricep dips, claims Czech manufacturers BTL. The result is an 18 per cent increase in muscle mass in both the upper and lower arm, leading to significantly less wobble.

Grandmother-of-six Tiffany Suchard became one of the first in Britain to try the new treatment earlier this year....

....Tiffany had already had EMSculpt treatment on her midriff and had been delighted with the results, which she revealed in these pages.

So she jumped at the chance to test the new arm application. She had six sessions, each a week apart. ‘It’s a strange feeling – different to when it’s on the tummy,’ she says.

‘The pulses make your arm jerk, and you have to resist it or they move, so you feel a bit like a puppet – but it’s not uncomfortable.

‘I fell asleep during one treatment. Afterwards, you’re a bit achy, as if you’ve been lifting weights.

'But that goes after a day. I noticed my arms looked a bit more toned after just one session, and after six, I’m so pleased – they seem so much better. I’m looking forward to wearing my sleeveless gowns, and even bought a new one to celebrate.’

.....The ideal patient is already in fairly good shape but just needs a bit of extra help,’ explains Dr Rakus. ‘Men love it too, as it gives them bigger, more muscly arms.

‘The best thing is that patients not only look better, but because it improves muscle strength, they tell us they feel stronger and more stable too.’