How to Plump Your Pout Without Fillers - FEMAIL tries the non-invasive Lip Perk machine that promises to give a noticeable boost to your mouth. By Alice Hart-Davis 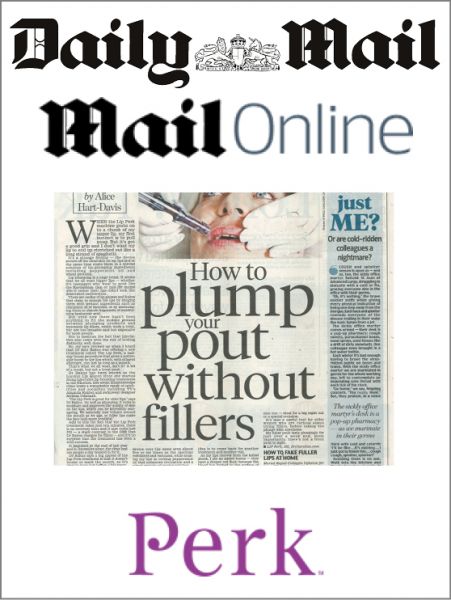 How to Plump Your Pout Without Fillers

Lip plumping is a huge trend. It seems that we all want bigger lips — whether it’s teenagers who want to pout like the Kardashian clan or mid-life mums who’d rather their lips didn’t look like desiccated earthworms. There are oodles of lip glosses and balms that claim to enlarge the lips by stinging them with irritant ingredients such as cinnamon oil or menthol, or by encouraging them to absorb fragments of moisturising hyaluronic acid.

But until now there hasn’t been anything to fill the middle ground between plumping products and injectable lip fillers, which work a treat, but are too invasive and too expensive for most people.

Not to mention the fact that injectables also come with the risk of looking distinctly, well, done.
So, my ears pricked up when I heard that Dr Rita Rakus was offering a new treatment called The Lip Perk, a half-way house procedure that gives a noticeable boost to the lips which, with diligent aftercare, can last as long as a month.
That’s what we all want, isn’t it? A bit of a boost, but not a trout pout.

Dr Rakus has been known as the London Lip Queen since she started doing injectable lip-boosting treatments in the Nineties. Her swish Knightsbridge clinic hosts a remarkable range of celebrities and socialites including TV’s Amanda Holden and swimwear designer Melissa Odabash.

‘The Lip Perk is great for older lips,’ says Dr Rakus. ‘As well as plumping, it locks in moisture and improves the quality of skin on the lips, which can be incredibly anti-ageing. We naturally lose volume around the mouth as we age, so fuller lips make the face look more youthful.’

Add to this the fact that the Lip Perk treatment takes just ten minutes, there is no recovery time and it also costs just £65 — a stark contrast to the £690 that Dr Rakus charges for fillers — and it’s no surprise that the treatment has been a wild success.
It launched at the end of last year and in December alone, the clinic had ten people a day booked in for it.

Dr Rakus says a big appeal of the Lip Perk treatment is that it doesn’t bruise or mark the mouth, so it’s ideal to have just before a big event.

As treatments go, the Lip Perk is extremely quick. It’s done with a pen-like device that cleanses, exfoliates and uses vacuum-like suction to plump the lips.
The therapist lightly cleanses my face, then starts to work at the outer corner of my top lip. She rubs the device over the same area about five or six times as the machine exfoliates and vacuums, while soaking my lips in cooling peppermint oil that enhances circulation and a wheat protein plumping solution.
Once I’ve stopped worrying that it will vacuum my lips to bits, I can see that applying a judicious amount of suction is a sure-fire way to make the lips look plumper.
And while it sounds scary, it doesn’t hurt at all.

When the treatment is complete, the therapist massages the excess serum into my lips and applies a coat of lip balm to seal it in.
I can immediately see the difference. Fuller, plumper, fresher looking lips. Wow — it’s impressive. But how long will they stay that way?

She hands me a vial of the serum she has been using and instructs me to apply it twice a day to maintain the volume. When that runs out, the idea is to come back for another treatment and another vial.
As my lips recover from the initial shock, I see an added bonus — they have a deeper red flush because the blood has rushed to the surface of my skin.
It looks as if I am wearing a bespoke shade of lipstick and lasts for a few hours after treatment.

Over the next week, I find the magic stuff in the vial does help my lips look plumper than usual, as long as I remember to use it at least three times a day.
It is very runny and if I let it dry out without putting lip balm (as directed by my therapist) over the top, it feels drying and a bit chapped.
I don’t mind the light tingling effect the peppermint oil gives, and the hyaluronic acid and wheat proteins seem to be doing their job at plumping.

It’s a modest improvement, but a nice one — ideal for a big night out or a special occasion.
It’s also a useful tool for older women who are curious about trying fillers, before taking the plunge with injections.
My fuller pout lasts pleasingly for just over a week and, most importantly, there’s not a trout pout in sight.